First published in Mothering Magazine in 2006. 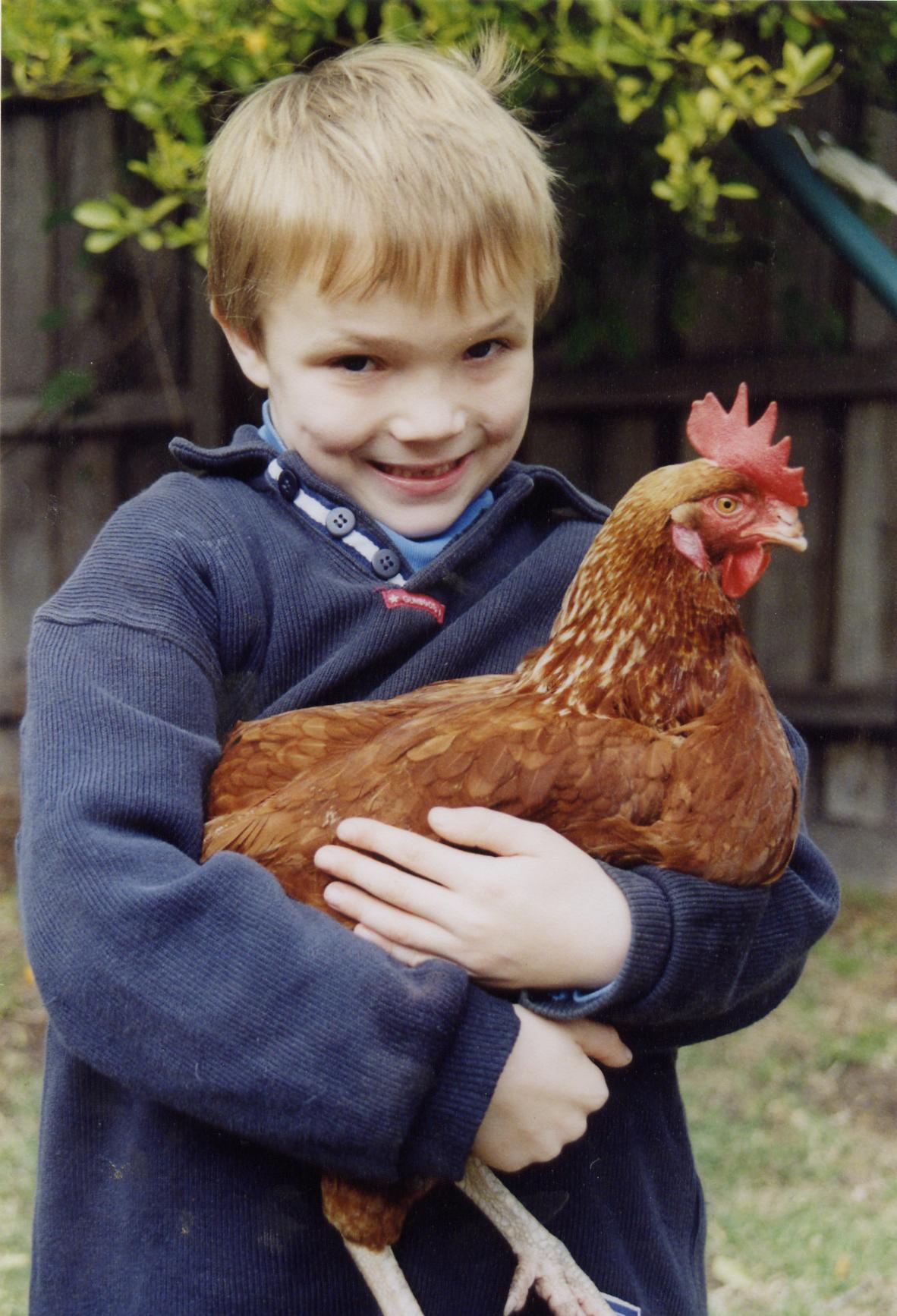 We thought getting chickens would teach our family about new life, but it turned out we had a lot to learn about death first.

About a year ago our friend from the country offered us three 4-month-old chickens. We were dubious, but our three pet-less boys begged. Somewhat reluctantly, we agreed.

On the chickens’ first day with us I had an evening meeting and, in the ensuing chaos of dinner, baths, homework, babysitter (Dad was out of town), I managed to forget all about our brand new feathered friends. Upon returning home at 9pm I realised I hadn’t locked the chickens in their pen – absolutely essential in our fox-ridden neighbourhood. They were nowhere to be seen. With a flashlight in hand I scoured the garden then the street for over an hour. Could our first-ever pets be eaten by a fox because of my forgetfulness? I went to sleep praying for a miracle.

After that initial hiccup, the first week with our pets was a delight. Florence, Jonti and Hannah settled in quickly to their new home and our kids loved playing with and feeding them. The experiment was a success.

However, the next weekend we were gearing-up for a family bike ride when we noticed the chickens missing. Eventually we found one cowering in the roost. A second had hidden herself in a tree. But Florence, the leader of the pack, had disappeared. Five minutes later we saw a neighbourhood dog running down the side of the house. We discovered Florence dead, in the bushes. My husband, Darryl, and I were surprised by the sadness and guilt we felt over the death of this little chicken we barely knew. The kids seemed much less affected than we were; we tried to follow their lead and let it go. So we packed Florence in a shoebox and bid her an unceremonial farewell.

A few weeks later I was up very early one morning when I heard a strange noise coming from the backyard. It sounded like a feeble “cock-a-doodle-doo”. Upon investigation, I confirmed that it was Jonti: our sweet brown hen was actually a rooster in disguise. She would have to go back to the country as roosters are strictly Verboten in our suburb.

Suddenly we found ourselves with just one remaining pet, Hannah. By now most of the family was losing confidence in the wisdom of this venture. Over the next month Hannah began acting strangely. First we noticed a bit of a wobble, then she started to shake and soon stopped eating. She had developed a common, fatal chicken disease and it became clear we would soon be farewelling her too. The final week of her life seemed to drag on forever. We were already emotionally drained from losing the first two; another imminent pet-death was seriously depressing. After Hannah died we carried her off in the now-traditional shoebox; the final, painful end to our failed chicken-rearing days.

We hadn’t laid eyes on a single egg, had suffered significant anxiety and some expense, and now wondered if our kids would develop deep-seated pet phobias from our one dismal animal ownership experience.

However, to our amazement, our boys were keen to give it another go; they pleaded with us to try again with new chickens. After some debate, we gave in. We had, after all, built the coop, so we might as well use it. We bravely hoped Round 2 would have a happier outcome. We went to our local outdoor market and bought three more young, healthy-looking chickens: Ginger, Hannah (the 2nd) and Jonti (the 2nd).

It’s now about six months later and we’ve had nothing but joy – and, it must be said, a truckload of poop – from our second crop of pets. They are amazingly people-friendly and willing to be cuddled. They tolerate awkward snuggles from our stocky two-year-old, who wraps his stubby arms around them, leaving their legs dangling helplessly. Ginger even endures repeated rides around the garden in the back of the little yellow dump-truck. Recently our 6-year-old came crashing into the house, laughing, and yelled “Ginger licked my tongue.”

Our chickens graze peacefully on the lawn, creating something of a calm, pastoral wonderland in our suburban garden. Daily we enjoy the delight and pride on our kids’ faces as they arrive in the kitchen with several still-warm eggs cradled carefully in their hands. The chickens produce 15-20 eggs a week, leading to regular Saturday morning soft-boiled egg feasts and plenty of incentive for baking. Good for the soul, if not the cholesterol levels!

My husband’s grandmother died last week; he was a pallbearer at the funeral. Looking back, the simple lessons of watching our chickens live and die, of carrying away those two small dead animals in cardboard boxes, might have been preparation – a small preparation for carrying the body of a beloved grandmother. Saying goodbye was still, of course, emotional. But now it seems that our family can understand a bit more tangibly that death is just one part of life.

The chickens won’t last forever, but these lessons certainly will. And in the meantime, if you come around to our house, you’ll probably find us in the backyard enjoying our farmyard paradise.